Soon after I began my genealogical research I realized I had never seen any pictures of my parents’ wedding.  I mentioned this to my mother and learned that no pictures had been taken with the exception of those on an eight mm camera owned by her Uncle Bill Agard.  Because it was a “moving” picture camera, no photographs were produced.
Consequently, on September 12, 2001 when my parents would have been married sixty years - would have been except my father died in 1988 - it really bothered me that my mother did not have one photo of their wedding day.
Since Bill’s daughter lives in the family farmhouse, I asked her about the film. After several months it was miraculously located and mailed to us. A local technician repaired the tear in the tape and transferred it to a VCR.  But I needed it on a CD so we could put it into the computer and using PhotoShop make stills that we could send to my mother. I mentioned the situation to our neighbor, a commercial photographer, and he said he would give it a try. He successfully transferred the VCR tape to a CD and then showed us how to manipulate the film in PhotoShop. Another neighbor gave us special Kodak paper on which to print the photos, and on March 18, 2002 via Federal Express, my mother saw, for the first time, pictures of her wedding day! 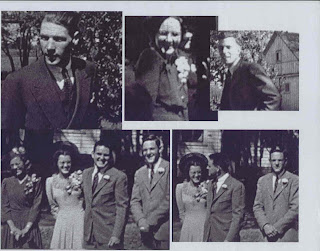 This photo is a sampling of what we captured from the 8 mm film. Top left is their friend and fellow lifeguard, Chuck Lueder; middle is Mother of the Bride, Maude Agard ; right is Uncle Bill Agard. The wedding party consisted of Maid of Honor Adeline Agard (Tamburino), Carol Agard Nunn, Edward Nunn, and Best Man J. Richard Agard.
The marvels of technology!
Posted by Mary Nunn Maki at 8:34 AM