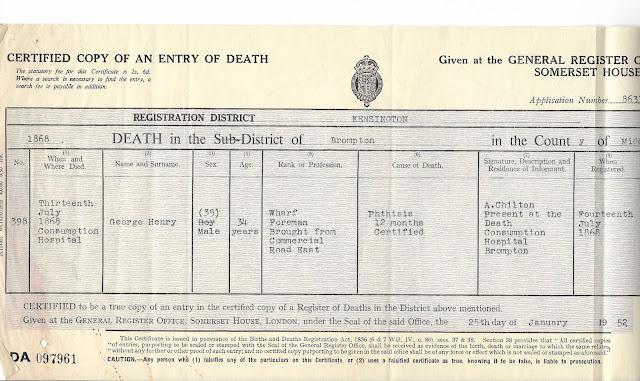 On our hike at Lake Anna State Park (VA) last weekend, I had the opportunity to walk for a time with a neighbor who told me she had inherited some vital record documents from her father. The documents meant nothing to her, and she didn’t think her daughter cared, so she was going to throw them out. The genealogist in me said, “If you’ll loan them to me, I’ll scan them and put them on my blog. That way if there is anyone out there researching this family, they can find them.” She agreed.

Early yesterday morning I scanned fourteen large documents of her father’s relatives in England and Ireland. There was also a folder of responses her dad received during the 1950s and 1960s from letters he sent to Irish custom houses, circuit courts and hospitals looking for records on William Henry and George Henry. The letters were to officials in Dublin, County Cork, The Waterford Heritage Society, and the Huguenot Society. I did come upon one letter – finally – dated 22 January 1952 when he received a positive reply from the Hospitals for Diseases of the Chest. His death was registered in the County of Middlesex, and is in the General Register Office, Somerset House, London. That letter is shown below. 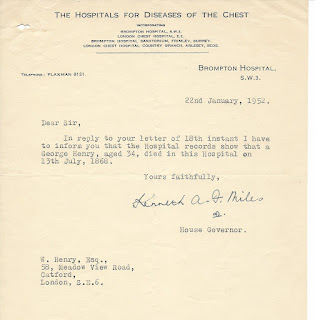 Over the next period of time I will post more of these documents with the hope they will prove helpful to some researcher here or abroad.
Posted by Mary Nunn Maki at 2:48 PM No comments:

Email ThisBlogThis!Share to TwitterShare to FacebookShare to Pinterest
Labels: George Henry d: 1868, Hospitals for Diseases of the Chest, Irish research

A Mystery to Solve - Now Solved!

I’ve been working on reorganizing, archiving and indexing my genealogy material. While adding items to my Agard Box #1, I came across a letter my great-grandfather, Arthur Agard wrote to his son, Merritt Agard, who was wintering in Florida. The letter was dated 17 February 1968, just two weeks shy of when Arthur died in his sleep.


My great-grandmother, Jessie Tucker Agard, started the letter and then handed it over to Arthur to share his news. And that is where the mystery comes in.


Below is a transcription of Arthur’s news and I wonder to what issue he is talking about. It refers to a road reconfiguration, so I thought maybe they were considering building a road diagonally from Route 96 to Route 89. But that doesn’t make sense. My cousin thinks it might have to do with zoning. Or, could it be gerrymandering? The Ulysses Town Historian is checking with his colleagues at the historical society, and my cousin is checking with the local zoning officer. I was hoping any Blog readers from the Town of Ulysses, Jacksonville or Trumansburg might have an insight as to what this issue was in winter 1968.


“People are curious about the road and make all kinds of remarks. The Boulevard suburbanites held a meeting at Glenwood Pines and asked Bill (Agard) to come to it as he had the most inside information. As he and Bennett Stover went to Syracuse and saw the maps and since has had a set here to study, but did not take them to Glenwood meeting. It goes south of Scotts and crosses the creek and takes the old Spicer (?) house at top of hill and crosses the old Fowler 9 acres and woods and crosses the swamp on Furman and crosses Kraft and hits us (Agard Road) about 500 feet wide. Railroad counted out. Takes English’s and Ogden’s and schoolhouse (Willow Creek School) and all of Frasiers and 9 acres of the Atwater place and on to Paul Vann’s. There are no crossovers on the map. They work them out as demand calls for.”

14 June 2017
Thanks to cousin Nan Agard Colvin, Sarah Koski, Ulysses Deputy Town Clerk, Darby Kiley, Environmental Planner, Town of Ulysses, and Carissa Parlato,Clerk, Town of Ulysses, the answer to my mystery is solved. In a link to the Official Minutes Books 1959-1976 I found a mention in the March 6, 1968 minutes that the state was planning an extension of Route 96 that goes between Ithaca and Trumansburg. I don't know what the plan was exactly, but according to Art Agards letter, it might have planned for the road to veer down to connect with other roads in the Willow Creek area, run across the top of the ridge, and come out near the hospital. That's only a guess.

Posted by Mary Nunn Maki at 3:57 PM No comments: