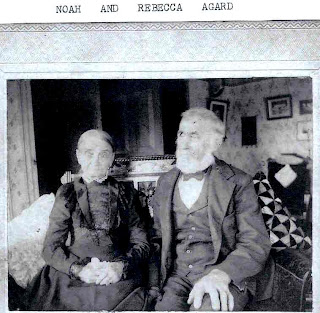 I am thankful I came upon this letter written in 1869 by my great-great-great grandfather Noah Agard to his wife, Rebecca Ann Fletcher Agard:
February 28, 1869
Dear Wife:
“I bless the day thou was born.” Forty-five years ago this day what a stir there was in one little family; how one suffering woman having safely passed the trial of maternity looked thankfully on the face of her only living daughter and hopefully looked forward to a comfort and companion in the future years. We know how well those hopes were fulfilled and how often she had cause to “bless the day thou was born.”
Now in your midday with the care of so large a family upon you; may heavenly wisdom and patience be given you to so instruct and guide the children; that they to their latest day looking back, shall “bless the day thou was born.”
And, may many future years of usefulness and happiness bear you gently on to the fullness of Christian grace that shall enable you in looking back over a life well spent.
And forward in confident trust of a blissful future also to “bless the day in which thou was born.”
Your ever-loving husband,
Noah Agard
Posted by Mary Nunn Maki at 2:18 PM No comments:

When I was a baby genealogist and Internet genealogy resources were limited, I blithely searched for the Conlon family, with little satisfaction.  I searched various sites using variations on spellings, but this family would not be found.
Mae Conlon is my grandmother’s cousin. I found Mae, along with her three brothers, Edward, George, and Lawrence living with my grandmother's parents, the Doyles, in their Manhattan apartment, in 1920. I found the boys’ 1917 WW I draft cards. In 1910 Edward, George and Lawrence were living in the Orphan Asylum for Boys in Manhattan. Where was Mae? She was not listed with the Doyles. And I still could not find their parents.
My research philosophy is to look again. New information on established sites as well as new Internet sites is available every day, so it is imperative to go back and look again.
The Conlon brick wall had me stumped so I put it aside for quite some time. As Internet resources expanded and my research skills matured, I felt ready to tackle this family line again. I checked the 1910 census; no change there. But FamilySearch.org now has the 1905 New York census online and I don’t believe I had looked there previously for the Conlons.  And there they were on June 1, 1905 living in the Borough of Manhattan, 1505 Lexington Ave, New York City. The family consisted of: Edward Conlon age 31 making his living as an electrician; Mary Conlon age 31, Edward Conlon age 7, George Conlon age 6, May Conlon age 3, and Anna Conlon age 2.
As with most genealogy searches, new information leads to more questions. I had not known about Anna; I cannot find either Anna or Mae in 1910, and most of all, what tragedy befell this family so that the children ended up in an orphanage?
Posted by Mary Nunn Maki at 4:04 PM No comments:


Although my brother Skip and I were saved from contracting polio by being Polio Pioneers, we did however suffer through the usual childhood diseases of the time – chicken pox and measles.
I don’t remember now which one of us contracted measles first. But our clever parents found a way to care for us while keeping up with their responsibilities of running a business. We were each ensconced in our own guest room on the second floor of the restaurant so that Mom and Dad could continue to work, while keeping a close eye on us.  Bed rest in a darkened room was mandatory. I remember how hard it was to stay in bed in a room by myself with all the activity going on down below. Of course I was provided with things to do, books to read, coloring books, dot-to-dot books, paper dolls, but it just wasn’t the same. 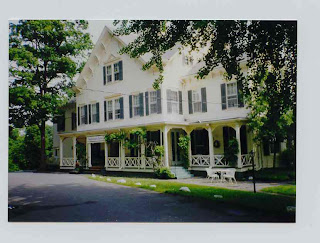 From that day forward the two second floor guest rooms to the right and left of the center windows were labeled “Skip’s Measles Room” (right), and “Mary’s Measles Room” (left)
Posted by Mary Nunn Maki at 2:39 PM 1 comment:

I have noticed a number of views on the blogs I did regarding St. Joseph’s Home in Peekskill, New York, so I thought I would expand on that information and add more photos.
In June of 1900 the Nunn family, who lived at 2030 First Avenue, New York, was struggling. Katherine had just given birth to her eleventh child, Charles Casper, born in May 1900. Her husband, Joseph, died in early June 1900. Thirteen-year-old Elizabeth was left to care for her siblings while attending to her father’s business. It was a losing battle. On June 12, 1900 the City of New York’s Department of Public Charities arrived at 2030 First Avenue and took the children, with the exception of Elizabeth and infant Charles Casper. The children were placed with the Sisters of the 3rd Order of St. Francis St. Joseph’s Home in Peekskill, New York. Elizabeth might have stayed with the Lewis family who lived in the same building, and who also had a large family. Baby Charles died in September of that year. The mother, Katherine, was admitted to the Manhattan State Hospital on June 26, 1900 for dementia. She died there seventeen years later on May 12, 1917 of Typhoid Fever. It is possible Katherine is buried on Hart’s Island, NY.
“Charity is the very center of Catholicism,” states the dissertation of Sister M. Jane Thomas Gorman FMSC.[1] During the mid-1800s, the Catholic Church reacted to the numbers of children throughout the country that no longer had family support. Catholic children were being placed in non-Catholic institutions, which threatened the core of their Catholic heritage.
On July 24, 1880 the first boy was admitted, and by 1899 St. Joseph’s was like a miniature city housing 1100 residents. The school offered traditional education courses, technical training, sewing, household arts, shoemaking, carpentry, baking and gardening. Travis Point, on the Hudson, provided bathing accommodations.  For chores done, the children received a daily salary of 12 cents; one cent fine for not doing their lessons was imposed. “St. Joseph’s was one of the first institutional schools to be placed under the New York State Regents.”[2]
In 1932, while chaplain at St. Joseph’s Home, Fr. Michael McGuire wrote the New Baltimore Catechism that was published in 1942.
The school celebrated its 100th anniversary in 1979; an arson fire destroyed the buildings and the school was taken down in January 1980.
In 1904 the home housed a total of 1,009 children, 711 of which were from New York City. By 1905, residents numbered 1,056, with 787 from New York City. The 1905 New York Census for the Fifth Election District Peekskill, NY St. Joseph’s Home shows the Nunn children in residence:
Emma Nunn   age 6
Emilie Nunn   age 8
Joseph Nunn  age 9
Katie Nunn    age 12
George Nunn  age 13
One hundred ten years separate me from when my grandfather walked these grounds of St. Joseph’s Home. Visiting there provided me with a better understanding of his growing up years. And if he only knew – maybe he does – that I found him a century later.
[1] Gorman, Sr. M. Jane Thomas, Fordham University Dissertation by. Tertiary Franciscan Missionary Sisters Sacred Heart, 1946 on St. Joseph’s Home, Peekskill, NY, April 15, 1946. Report at Westchester County Archives.
[2] Gorman, Sr. M. Jane Thomas, Fordham University Dissertation.
Posted by Mary Nunn Maki at 8:57 AM 85 comments:

Jessie May Tucker Agard is another of my Fearless Females.  Jessie kept a diary for each year from 1944 through the 1960s.  It is interesting that although she was Ulysses Town Historian for twenty years, her personal diaries do not contain much socio-economic or political commentary.  Her first entry explains why she began keeping a diary. The war was on and her future son-in-law was serving overseas. Jessie participated in the war effort by making surgical dressings, and I am sure she hoped Louie would not be a recipient.
Jessie also mentions her sister Addie Tucker, an unmarried schoolteacher in New Jersey. I suspect Jessie worried about here sister as well during these unsettling times.
Diary introduction written by Jessie Agard
I kept a Diary in 1944. World War II was on – Louie Tamburino was in Service. Adeline was working in Rome. Addie was teaching in Asbury Park, N.J. She was home for the holidays. We were making “Surgical Dressings” for the war patients. We met every week at different homes in the neighborhood.
Years ago Dr. Kelsey and his family lived in our community. I was acquainted with the family, went to school with the children, Arthur, Emma and Tom.
Posted by Mary Nunn Maki at 6:31 PM No comments: