I met Arabella while working on an essay about her grandfather, Noah Agard of Litchfield, Connecticut.  In developing the essay I used files I had not looked at in a very long time.

Arabella C. Agard was born in 1827 in Catherine, Tioga County, New York, and continued to live with her parents and then her brother until 1882 when at age 55 she married Dexter Horton of Seattle, Washington.

Dexter Horton (b: 1825-1904)  was was born in Seneca County, NY, and early in childhood moved with his family to a farm in Shabbona, Dekalb County, Illinois. He married first Hannah Shoudy. They had two daughters Rebecca (b: 1850) and Nettie (b: 1863). Hannah died in 1872. Dexter then married Caroline Eliza Parsons.  Dexter and Caroline had a daughter, Caroline (b: 1878). In 1880 Dexter was widowed with seventeen year old Nettie, and four year old daughter, Caroline.  Dexter needed another wife. He found one during his year long sojourn back in the Finger Lakes when he met and on 14 September 1882, married fifty-five year old Arabella C. Agard.

Dexter Horton, entrepreneur, was Seattle’s first banker.  Because of his reputation for honesty, the local loggers gave him their money for safekeeping. He stored their money in sacks hidden around his store, and he even used a coffee barrel for deposits.  He kept good records for his depositors and the Dexter Horton Bank was established.

Fred'burg Cemetery Tour - It's not too late

We enjoyed the 11:00 tour this morning with a visit to the Mary Washington Monument, her meditation rock, and the Masonic Cemetery.  We skipped the tour of St. George's Cemetery since our history club visited that cemetery just a few weeks ago.

The trolley was full for the tour, and I suspect on this beautiful October weekend, the rest of the tours will fill up fast.
Posted by Mary Nunn Maki at 1:40 PM 2 comments:

Nothing less than dogged determination, stick-to-itiveness, and tremendous community support was required to accomplish the new Stafford Civil War Park that opened in April 2013.  According to the Friends of the Park’s website:
“The park exists today in no small measure due to key material contributions including 6000 tons of stone from Vulcan Materials Inc., concrete cast pipe from the Americast Hanover Pipe Plant, engineering support from Stafford made possible by a grant from the Civil War Trust, asphalt at cost from Virginia Paving and a grant by the Archaeological Institute of America for park signs as well as many smaller, yet still critical, donations of time and money from countless individuals.
Perhaps most important of all donations were three “Innovative Readiness Training Exercises”, the FSCWS proposed to the VA Army and Air National Guard that were conducted during the summers of 2011 and 2012. These exercises provided great training to VA Soldiers and Airmen on key combat skills, and have been estimated to have been worth as much as 2 million dollars to the park.” 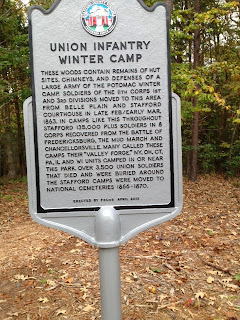 Our history club toured the park today and was awed to see for ourselves what a few determined men accomplished.  To see for yourself, the history of the park is nicely captured in a short YouTube video. 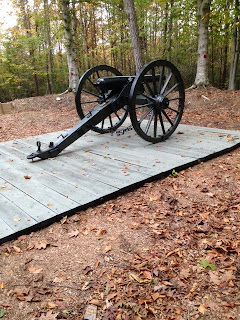 We encourage visitors to the Fredericksburg area to include the Stafford Civil War Park in their history tour itinerary.
Posted by Mary Nunn Maki at 12:26 PM No comments:

We were Polio Pioneers


“The Biggest Public Health Experiment Ever” was how Statistics: A Guide to the Unknown, edited by Judith Tanner, described the 1954 polio immunizations.

Since my last post I have been busy reading Polio: An American Story, by David M. Oshinsky. It is a well written and documented history of the disease. It helped me to understand what lead up to the immunizations in spring 1954.  So in a nutshell:

In 1938 Franklin Roosevelt, himself a polio victim, formed the National Foundation for Infantile Paralysis with the goal of finding a cure for polio while providing the best possible care for those afflicted.

The National Foundation’s successful annual March of Dimes campaign funded the research that made tremendous strides over the next decade. In the early 1950s the number of polio cases spiked again.

Surrounded by controversy, Jonas Salk’s vaccine seemed the best option for controlling the new polio outbreak.  With little testing, the vaccine, manufactured by Eli Lilly and Park-Davis, was rushed to market.  The first shot was given in April 1954 and successive immunizations given through the end of the school year. By that time over a million school children across the U.S. received the vaccine or a placebo.

Tompkins County children were among those chosen to be Polio Pioneers. Some children received the vaccine via shots while others took a liquid form.  Since I remember taking the liquid form in little white paper cups and my husband remembers receiving a shot, I wondered why the different forms?

From reading Prof. Oshinksy’s book, I learned the reason might be because documentation was sent immediately to the Vaccine Evaluation Center in Ann Arbor, Michigan where the results were collected, processed and coded.

The formal report given one year later on April 12, 1955 was that the vaccine was successful.

The answer to our question: Why did students at Newfield Central School receive shots while those at the Willow Creek two-room schoolhouse in the Ithaca district receive the oral vaccine - may never be answered.
Posted by Mary Nunn Maki at 8:48 AM No comments:

It’s My Three Year Blogiversary! And - Calling all Polio Pioneers!

Last Monday’s blog that developed from identifying an old photo to finding information on Ithaca's 1916 polio epidemic has kept me preoccupied with further research on this topic. The question: oral versus shots.

I vividly remember the day I became a Polio Pioneer. I was attending Willow Creek School as a second grader.  We had been indoctrinated about the importance of the role we were about to undertake.  We knew that some children would receive the live vaccine; others a placebo. With much anticipation we marched into the central hall that separated the two schoolrooms.  In the hall was a long table filled with little white paper cups that held the liquid.  And that is where my memory ends. I do not remember getting an additional shot.  My husband, who grew up at the opposite end of Tompkins County, said the students in his school received the polio vaccine via shots.

I learned from a brief Internet and yes, encyclopedia, search that the oral vaccine wasn’t available until the early 1960s.  If that was true, how did we happen to have it available to our rural school in abt 1954?  Or, was the oral vaccine the placebo?

I contacted the Tompkins County Historian, who immediately replied she didn’t know the answer to my question, but was now herself very curious. She grew up in New Jersey at about the same time and also received the oral vaccine.  She suggested I contact the Tompkins County Health Department.

Before doing that I contacted the History Center in Ithaca.  They too responded immediately, but saying, sorry, all they had were a few photos of children getting the vaccine.

We are awaiting a call back from the Tompkins County Health Department from a nurse who might know if the polio records from the 1950s were kept and if so where they might be archived.

In the meantime I went to the library to take out Polio: An American Story by David M. Oshinsky.  This book will not give me the specific answer I am looking for as far as immunizations in Tompkins County is concerned, but it will give me a lot of interesting information on polio in general.

And offshoot of finding the photo of the Lamkin family is my husband just finished an article on the Lamkins and the polio epidemic for the Newfield Historical Society’s next newsletter.

You just never know what road genealogy research will take you.
Posted by Mary Nunn Maki at 12:17 PM 2 comments: