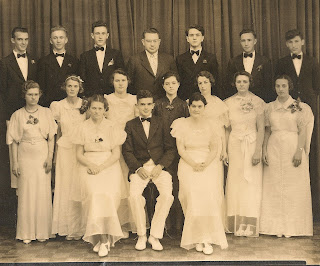 The Newfield High School Class of 1937 graduation photo is a true treasure.

Email ThisBlogThis!Share to TwitterShare to FacebookShare to Pinterest
Labels: Newfield NY Class of 1937


Maria Hardenbrook was born abt 1815 in New Jersey. She was the second child of George and Ann Kline Hardenbrook.  According to the records at the Ulysses Historical Society, Maria married John T. Powell on 7 September 1853.

John T. Powell made his living as a tailor. He died 12 March 1881 at the age of 74.  John, and the rest of his family, except Maria, is buried in the Tyrone (NY) Union Cemetery. This cemetery was also known as the Williams Burying Grounds.

It would therefore make sense that Maria would be interred in the Tyrone Union Cemetery, but she does not show up on the listing of graves.  Consequently, I have yet to discover Maria’s death date and where she is buried.  I have a call into the caretaker of the Tyrone Union Cemetery and hope to hear from him soon. And I would love to have any information Powell family genealogists might have as to Ann Eliza’s maiden name as well as to where Maria’s final resting place is located.

Posted by Mary Nunn Maki at 3:50 PM No comments: 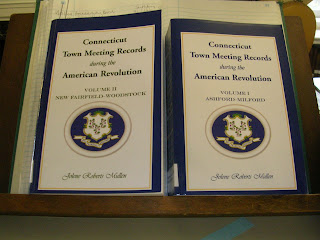 Jolene Roberts Mullen’s recently published two-volume set of extracted Connecticut town meeting records, titled, Connecticut Town Meeting Records During the American Revolution (April 1775-November 1783) was the subject of her talk to the Newtown Genealogy Club at its meeting on October 12.

Town meetings were generally held in December. It was at that time that town residents were assigned positions. Should you decline a position, i.e. you didn’t want to be the designated Fence Viewer in your neighborhood, then you would have to pay a penalty to the town in order to get out of the job.  Our forefathers found unique ways of raising money.  Another risky position was tax collector. If you were the tax collector, you paid the town the taxes due out of your own pocket, and then had to collect from all homeowners to get reimbursed.

A treasure trove of names are listed in these Town Meeting Minutes; named are all those who filled the lengthy list of offices (mostly unpaid positions), those who were in military service, took the oath of fidelity, Pound Keepers, Key Keepers, Sheep Master, Grave Digger, those who owned property along a new highway, and the list goes on and on.

For my family, Volume One listed Joseph Agard chosen as Surveyor of Highways in Litchfield, CT (Dec. 16, 1776), and also in Litchfield, Noah Agard was chosen as one of the tything men (December 7, 1781).

For anyone with ancestors in Connecticut during this time period, these volumes are a must for your genealogy library.

When I pull out a recipe that a friend or family member has shared, I always think about that person and the fun times we have had. It seems an appropriate time of year to share Aunt Vilma Hill’s Pumpkin Squares recipe.

Vilma Maki Hill was the daughter of Emil and Eva Nara Maki.  It wasn’t until she had passed away that we found out her real name was Wilma.  She did not like her name, and so at an early age she decided she wanted to be called Vilma. Since her sisters were Vieno and Violet, Vilma’s choice of name was accepted by family, friends and even her teachers!  Our Aunt Vilma was quite a character; she had a great sense of humor!  We miss her, but she remains close in our hearts through her wonderful recipes.

Note: Pumpkin Pie Spice can be substituted for spices.  Eliminate walnuts from topping if serving to those with allergies.
Posted by Mary Nunn Maki at 7:00 PM No comments: 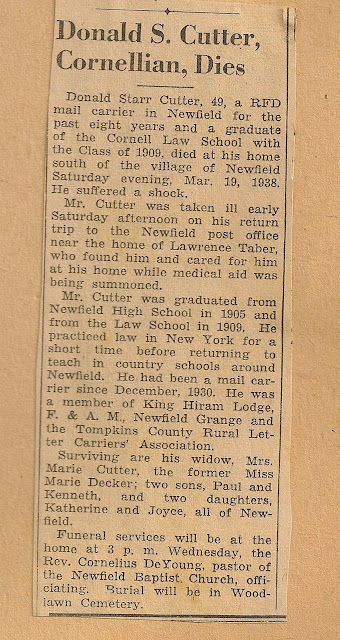 Donald was the only son of Delos and Lina Brown Cutter.  He graduated Valedictorian of his 1905 Newfield High School class.  It was through Lina Brown that the deadly Huntington’s Disease gene entered the Cutter family line.
Posted by Mary Nunn Maki at 7:00 PM No comments: