I was pleasantly surprised yesterday when I received a reply to the email I sent over the weekend to the staff at St. Michael’s Cemetery in East Elmhurst, NY.

My Joseph, aka Casper Joseph, is buried there under the name of Casper J. “Munn.” The grave location was provided. Joseph died of endocarditis.  Simply, endocarditis is an infection of the inner lining of the heart. There are many types, so no way of knowing from which one Joseph suffered.


Also buried there, according to the records, is ten year old, “Jason Munn.”  Jason was buried 8 November 1894.


My previous research found ten children of Joseph and Catherine Nunn. But in documents I have, Catherine consistently states she had eleven children. When I learned of Jason, I thought I might have found the missing child. But the name didn’t seem right for this family’s naming patterns. I pulled out my family descendant chart and immediately saw that “Jason” was actually Joe Nunn, born in 1884 and died 6 November 1894.  The eleventh child is still a mystery.


I was informed there are no headstones since the burial site was not privately owned. Meaning they were interred in the areas of this cemetery assigned to other free churches, “to provide a final dignified resting place for the poor.”


I immediately thanked the Office Manager who attended to my request with such speed. I sent her the descendant chart for her records, hoping she might make note of the correct spelling of the names, and mailed off a check to cover the research fee. The information provided was worth every penny!!
Posted by Mary Nunn Maki at 7:16 AM No comments:

My recent monograph on the Nunn family begins at the time Joseph Nunn and Catherina Kurtz arrive in New York Harbor and pass through Castle Garden. I located who I believe to be Joseph and Catherina on passenger lists and have the ships’ names listed in the manuscript. Their fascinating story unfolds from there.

I now want to search Joseph’s roots in Germany, a process I have been too timid to tackle before.  Attendance at our German SIG has provided the incentive needed to start that process. I have begun to locate and sort out the many German resources.

Although I checked FamilySearch.org many times during the development of the monograph, the site did not have anything new on this family line. As I begin another chapter in the story, I looked again.

Look again. New to the site is Joseph’s death certificate information!!!!  Up to this point I did not have a death date for him, though I suspected it was sometime in May 1900.  Actually, Joseph Nunn, harness maker, died 28 May 1900, was buried 30 May 1900 in St. Michael’s Cemetery, East Elmhurst, New York.

A Google search for St. Michael’s Cemetery told me the cemetery is in the borough of Queens and is one of the oldest religious cemeteries in New York. It is owned and operated by the Episcopal Church. I thought, there must be another St. Michael’s cemetery, as surely Joseph would have been buried in a Catholic cemetery.

Look again. After searching for other St. Michael’s Cemeteries in the Metropolitan New York area, I went back to St. Michaels and read further.  I learned the cemetery was purchased in 1852 by the Rev. Thomas McClure Peters, and it was his intention to provide “a final dignified resting place for the poor.” Parcels of the cemetery were assigned to area churches and institutions for these burials.

It now made sense why Joseph was buried there. I sent off an email request for information on Joseph’s burial and asked if there was anyone else – his children – buried in the section for the poor.

My family continues true to form, however, and although FamilySearch.org has Joseph’s death information and the birth of his many children, no images are available! 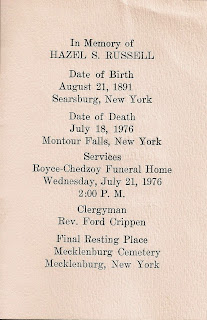 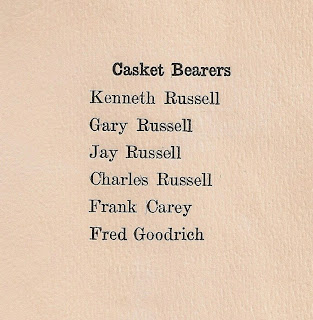 Posted by Mary Nunn Maki at 7:25 AM No comments:

She told us that Quakers dress normally, are mostly pacifists, mostly abolitionists, Civil Rights activists, and educators. There are approximately 359,000 Quakers worldwide with 87,000 in the U.S.

George Fox (1624-1691) of Leicestershire, England was the founder, and he believed “There is that of God in Everyone.”

In 1681, the King of England gave William Penn (one of Fox’s most important converts) 45,000 square miles in the new world for a Quaker colony. That colony was to be called Pennsylvania.

Quaker records were kept in the monthly meetings (not quarterly meetings). The monthly meeting records can contain information on births, marriage intentions, records of discipline, disownment, removal/transfer of membership, memorial minutes, and burial requests. There will be two sets of minutes – Men’s Meeting and Women’s Meeting. You might find non-Quakers in these records as they may have attended a marriage as a witness.

William Wade Hinshaw (1867-1947) is Elizabeth’s hero. He collected and compiled Quaker meeting records into family groups and produced the Encyclopedia of American Quaker Genealogy. Ancestry.com has fully digitized all volumes. Other places to search for Quaker records are print collections in archives and university libraries, and online resources.

Posted by Mary Nunn Maki at 4:07 PM No comments:

German Research for the Beginner

On Monday evening I attended my first Special Interest Group (SIG) meeting. Our genealogy club has started a German SIG and I signed up to get help with “over the pond” research into my Nunn family line.

I recently finished a monograph on this family, but the story starts with the arrival of Joseph and Catherina (Kurtz) Nunn into New York City. I have been timid about doing any research across the pond, so when the opportunity presented itself to join others who are doing German research, I decided to take the plunge.

The meeting was loosely structured with going around the table having those in attendance share their brick walls. We were able to help each other with research ideas. I admit I have done nothing with regard to finding German resources and so I appreciated the suggestions provided.

Since I have never belonged to a SIG I wondered how others are structured. I found a nice write up on The Villages (Florida) website I found helpful. I will make these suggestions to our leader.

I will start with FamilySearch.org where their Wiki has a listing of towns and what resources are available for each town. I learned about Sippenbuchs (family books). It was suggested I check German newspapers in New York, Germans to America (I did this years ago, but wouldn’t hurt to look again), and to double check to see if Joseph did have some sort of naturalization petition. I have to research German history to fully understand the political and economic boundaries. At our next meeting we will examine the evolution of the Germanic lands of Europe, and attendees are encouraged to bring website addresses that they have used in their research.

Today I made a German Research folder and began to find information to get me started. One web site chocked full of information for the beginner is: Genealoger: Family History and Genealogical Services.

I will check Geneablogger for German research blogs, and of course, “just Google.” And I will get back into my German language Mango online learning lessons through our library's website.
One last thing: A mother and teenage daughter who attended our SIG were trying to find Ann Heitz who arrived in 1901 – they weren’t sure where, though this family ended up in California.  So in my searching I will keep an eye out for Ann.

Posted by Mary Nunn Maki at 1:00 AM No comments:

When it was time to research and write the story of Amos Tucker I was stumped when I found his military papers said he was killed in the battle of Petersburg on 8 June 1865, but his stone in the Mecklenburg (NY) Union Cemetery has the death date of 2 March 1865. Amos served in the 179th New York Infantry.

I admit when I came upon the difference in dates I decided to bypass poor Amos and went on to the next sibling. It wasn’t until Saturday’s presentation by CRRL Librarian and Civil War researcher Holly Schemmer that I decided I had to do Amos justice. I had to write his story, and Holly got me motivated to do so.

Holly shared with those present four documents she has put together to help search Civil War ancestors. Following her suggestions I will develop a strategy.

Since his wife Martha (Gosbeck) Tucker died young, I won’t find her in the 1890 Civil War Veterans and Widow Schedule, or Pension records, but this is a GREAT resource for others.

Holly mentioned The Civil War Trust is a wonderful resource and had great maps.

I have a lot of work cut out for me, but I do owe it to Amos and Martha.
Posted by Mary Nunn Maki at 1:20 PM No comments: 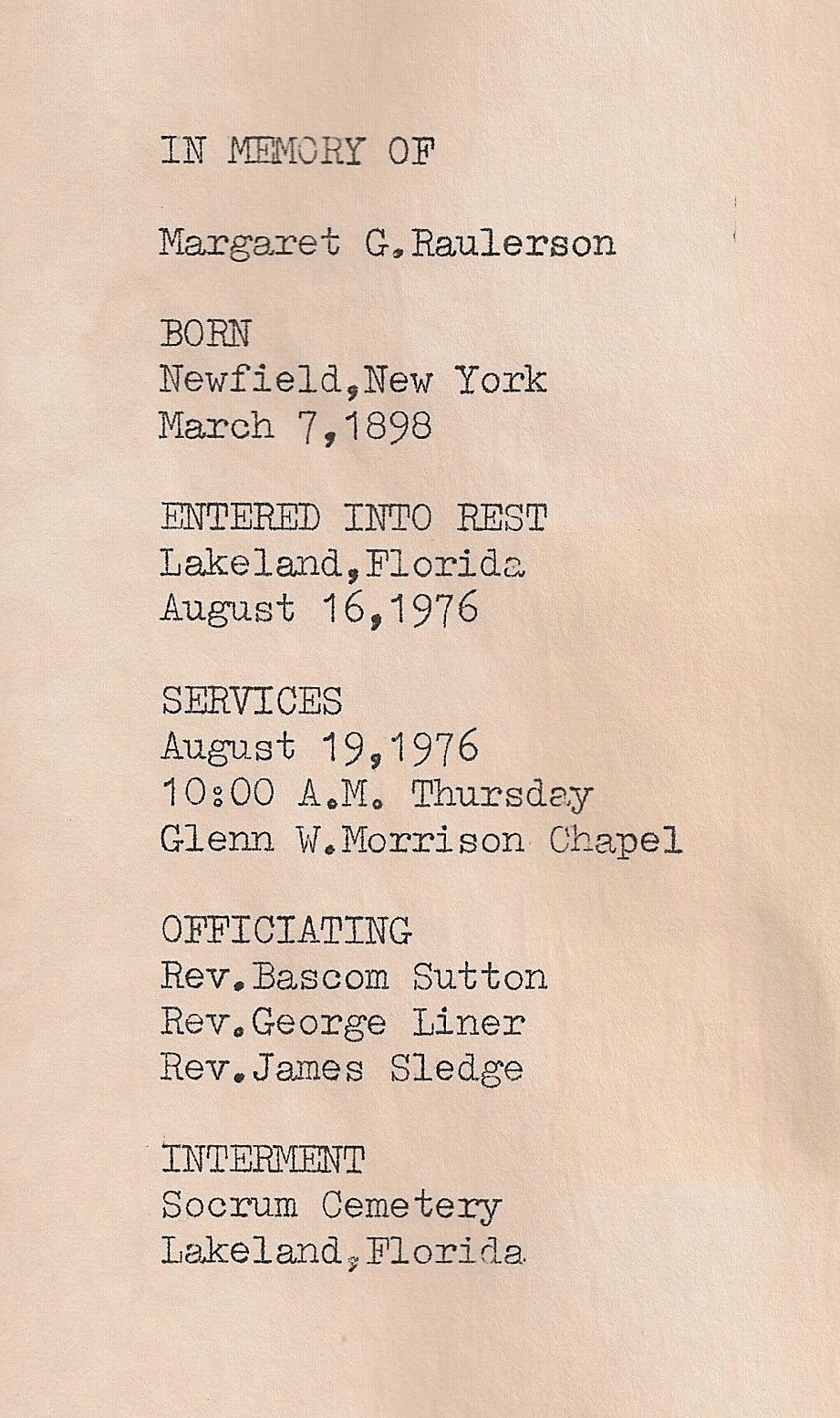 It has been a while since I posted a funeral card. The reason, I posted all the early years found in my mother-in-law’s scrapbook, and I am cautious about posting information on recent (2000 to present) deaths for privacy reasons.

I subscribe to Vita Brevis, a blog of AmericanAncestors.org (New England Historic Genealogical Society), and a recent blog by Lindsay Fulton listed 7 Vital Record Alternatives, which included the value of funeral cards for finding recent relatives.

I decided to return to the scrapbook to see if there were any pre-2000 funeral cards and I found a few. I will be posting those over the next few weeks. Lindsay followed that blog with one titled, “8 More Vital Record Alternatives.”
If you have New England ancestry, you might want to subscribe to Vita Brevis (free). If you wish to see Lindsay’s 15 vital record alternatives, go to AmericanAncestors.org. scroll to the bottom right where you will see the Vita Brevis blog. Click on that and see “Authors.” That drop down box is alphabetical by last name. Click on A-F and scroll to the bottom where you will find Lindsay’s blog post.