Because I thought I was close to the production stage with the Hardenbrooks of Seneca County monograph, I pulled from the bookshelf my copy of Producing a Quality Family History, by Patricia Law Hatcher, CG.

I first learned that my title was inadequate.  Ms. Hatcher advises that family histories should include: who, when and where in the title. My title is missing dates. Reflecting on that, I realized my title is also misleading, since I track the Hardenbrook family through Seneca, Cayuga, Tompkins and Steuben Counties. Back to the drawing board on that one.

Although I have my Chicago Manual of Style close at hand to guide me on the use of en dashes, etc. Ms. Hatcher points out there are genealogy related writing issues in which personal decisions have to be made.  Consequently, I should have developed a Personal Style Sheet much earlier since I write my family history as I research.  I now have to go back and make sure I am consistent with such things as: date format (June 1, 1830 or 1 June 1830), page formatting and layout, name spelling (sometimes your ancestor was called Mary, other times Polly), abbreviations (do you use “birth” or “b:”? does “prob” mean probably or probate?), and women’s names (how to refer to the women in your book – by maiden name or married name, or both? Should you put maiden names in parenthesis?).

The first decision a writer has to make:  Who is the audience?  This decision will help answer some of the questions for developing your style sheet.  Will your audience be professional genealogists or “cousins” and others interested in reading a good story?  Ms. Hatcher suggests you spell out as many terms as possible as it makes for much easier reading.

And before I "publish" I shall have to acquire a copy of Elizabeth Shown Mills' Evidence Explained: Citing History Sources from Artifacts to Cyberspace.

I prefer to write up my research findings as I go because it helps me identify missing information.  Either way, it is a good idea to develop your own style sheet sooner rather than later.

Posted by Mary Nunn Maki at 7:00 PM No comments:

My husband’s great-grandmother was Gertrude Howell Decker. She was an interesting lady. One story told about Gertrude was that when she didn’t get her own way, she threw a tantrum, even as an adult  One time when this happened she threw herself on the floor and appeared to be passed out. At that point the housekeeper threw a bucket of cold water on her!  That got Gertrude’s attention.

Gertrude, born 4 November 1872 in Sullivanville, New York, was the only daughter of Isaac Howell and Mary Bates Howell. Maybe that is why she always got her way. Of her four brothers, one, sadly, committed suicide.

She is survived by a daughter, Mrs. Marie Cutter, 2 grandsons, Kenneth and Paul Cutter, all of Newfield, 2 granddaughters, Mrs. Elmer Maki of Newfield and Mrs. J.R. Maki of Ithaca; 10 great grandchildren; a brother, Frederick Howell of Syracuse, nieces, nephews and cousins.  She was a member of the Newfield Baptist church and the Tompkins County Woman’s Christian Temperance Union. Burial in Woodlawn Cemetery.
Posted by Mary Nunn Maki at 7:00 PM No comments: 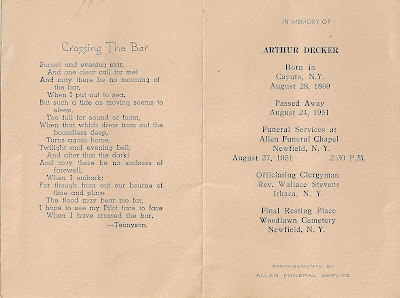 Arthur Decker was my husband’s great-grandfather. Arthur was one of five sons of Myron and Olive Fitzgerald Decker.

Arthur worked in the Elmira (NY) Correctional Facility, until he was hurt and subsequently disabled. At that point he worked as custodian at the new Newfield High School, as well as serving as Newfield’s Justice of the Peace. Arthur and Gertrude Howell were married in 1893 and had one daughter.

Posted by Mary Nunn Maki at 6:32 PM No comments:

The title of this blog is a bit alarmist, but I wanted to get your attention.  Today’s tip is just a reminder that cemetery transcriptions are not always complete.  That is especially true of those such as Find A Grave.

There are reasons for this, and a couple are:  the deceased person’s card or record was missed when the transcription was done as was the case with Lafayette Cutter in the Woodlawn Cemetery in Newfield, NY; there may be older cemetery transcriptions on websites that have not been updated, as was with Enoch and Emma Hardenbrook in the Ovid Union Cemetery in Ovid, New York, or it was not recorded because the transcription was done from reading the stones, and either the stone had disintegrated or your ancestor did not have a stone (again the case with Lafayette Cutter).

I was searching for Nathaniel Simpson’s date of death.  Nathaniel and his wife, Mary, raised my great-grandfather Enos Hardenbrook.  Although his wife, Mary Simpson, is buried in Trumansburg’s Grove Cemetery, Nathaniel was not listed, nor could I find him in any of the local Ulysses cemeteries.

The Index of Trumansburg Newspapers 1827-1940 by Bernece B. Weitzel, stated Nathaniel died in January 1930.   I had the opportunity this weekend to view the 31 January 1930 microfilm of the Free Press and Sentinel at the Ulysses Philomatic Library in Trumansburg, New York. There I found Nathaniel’s obituary that stated Nathaniel died 28 January 1930 and he was indeed buried in Grove Cemetery.  We did not have time to visit the cemetery, but I will be in contact with the sexton and verify the location of Nathaniel’s grave.

A reminder – don’t take the online lists as “gospel.”  Check with the cemetery sexton or the town clerk in the locality where the cemetery is located to verify the burials in the particular cemetery in which you are looking.

As a postscript: my husband recently purchased a stone for Lafayette Cutter. My husband located Lafayette's grave in April 2011, exactly 100 years from Lafayette's date of death.  Lafayette was the only one in that family plot without a stone. The stone is lovely, as close as possible in keeping with the other family stones. 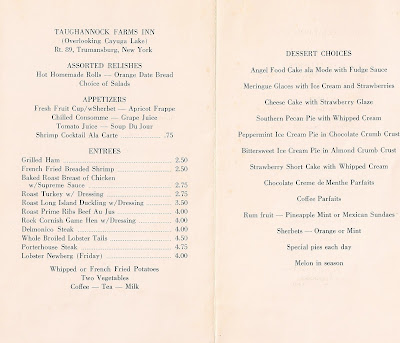 In finishing a monograph on the Hardenbrooks of Seneca County, I am writing about my grandmother, Maude Emma Hardenbrook Agard. In that process I came across an early and rare menu circa abt 1950s for Taughannock Farms Inn. Readers may remember that Maude and Merritt purchased this property on her 40th birthday, 16 May 1946. I say "rare," because anyone having the opportunity to dine at TFI knows that there were no menus - the waitresses recited the choices, beginning with appetizers through desserts. The later menus, all designed by Maude Emma, were much more extensive than this one, but it certainly provides a nostalgic moment.
Posted by Mary Nunn Maki at 10:50 AM No comments:

My Aunt Barbara Hamann Nunn’s father was a prominent citizen of the Niagara Falls community.  It has been fun researching this side of the family, especially when I learned that during the Depression Dupont "loaned" Mr. Hamann to the city to get their welfare operation running.  Below is Mr. Hamann's obituary.

A native of New York City, he had been a resident of the Niagara Falls area for 50 years.

He was education at the Taft School, Watertown, Connecticut, and at Columbia University, where he studied electrical engineering, graduating in 1910. After three years with General Electric in Schenectady, he came to Niagara Falls to work for the Roessler & Hasslacher Chemical Company.

He became chief engineer before the company was purchased by DuPont. Mr. Hamann remained with DuPont until his retirement about 15 years ago. He began wintering in Florida about five years ago and had gone there this year early in November.

Mr. Hamann was active in many social, civic and philanthropic organizations in the Niagara Falls area. For many years he was a director of the Niagara Falls Memorial Hospital, and was recently named an honorary director. He was also a member of the board of directors of the Hospital Corporation of Western New York.

He had been active in Community Chest for many years, having served as president and campaign chairman.

A private memorial service will be held in Deerfield Beach, FL. The family said that donations to the Niagara Falls Memorial Hospital, the YWCA or the Unitarian Church would be acceptable tribute.

On April 25 I posted a wedding announcement for Maggie Weatherell and William A. McCorn of Newfield, NY.  Recently, through my blog, I received additional information from David Marshall on the McCorn family that I would like to share.

Mr. Marshall writes: “I have been doing research on Dr. William Alfred McCorn for a project in which he is a minor character. You might be interested to know that McCorn was born in 1859 in Newfield, New York, and he graduated from Cornell University in 1879 and received his medical degree from the University of Buffalo in 1882. He died prematurely on February 18, 1904 at the age of 45, leaving a wife and daughter. McCorn worked all over the country in what were then called insane asylums, and he lectured and published and translated in the formative years of American psychiatry. Among the institutions with which he was affiliated are the New York City Asylum for the Insane (part of Manhattan State Hospital), the Wisconsin State Prison, the Milwaukee State Hospital for the Insane, the Long Island Home, the River Crest Sanitarium, the Illinois Eastern Hospital for the Insane, and the Elizabeth General Hospital.

I believe that the marriage notice is from about 1879, when McCorn graduated from Cornell and began his medical studies.”
***
An interesting aside is that my great-grandmother Katherine Kurtz Nunn was an inmate in the Manhattan State Hospital for 17 years.

Thank you, Mr. Marshall, for sharing this information on the life of Dr. William McCorn.
Posted by Mary Nunn Maki at 6:25 PM No comments:

Bath history states that Colonel Charles Williamson, a land agent for the Pulteney Estate arrived in the area of Steuben County in 1792 then populated by wild animals and a few Seneca Indians.  Controversy surrounds the origin of the town’s name. Some historians say it was because of the similar geography to Bath, England; others say the town was named for Lady Bath, the heiress of Sir William Pulteney of London.  The town was formed on March 18, 1796; the village incorporated on April 12, 1816.

Richard Hardenbrook moved his family from Ovid, NY to Bath where he did some farming and then served as superintendent of the Whiting and McCass Foundry before becoming proprietor of Steuben Furnace Company.

Posted by Mary Nunn Maki at 6:17 PM No comments:


It is a happy coincidence that our 43rd wedding anniversary falls on the day of the Wedding Wednesday prompt.  Our wedding took place at St. Catherine of Siena Church in Ithaca, NY. 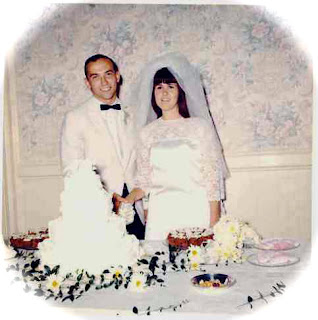 The ceremony was followed by a reception at our family restaurant, Taughannock Farms Inn.  The cake was made with love by the restaurant’s baker, Dottie Wright, and the waitresses helped keep wedding guests well fed and happy.

We felt quite special as we drove off to our honeymoon in Old Forge, NY in our new 1968 Oldsmobile Cutlass.  Following two days in the Adirondacks we headed to Lyons, Illinois and our apartment in the lower level of a family home so my husband could commute to his job at Libby Foods in Chicago.

Although much has changed in those forty-three years, one thing has not and that is our love and devotion to each other.
Posted by Mary Nunn Maki at 5:13 PM 2 comments: 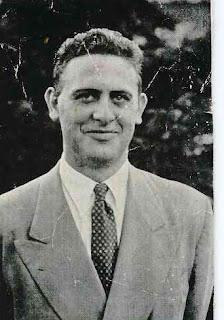 My uncle Bus’s first job, after his one-year stint with the Boston Shamrocks, was as a tour guide at the Niagara Power Plant. It was through his employment there that he met his future bride, Barbara Hamann. Bus and Barbara were married on 29 May 1941 at 4:30 p.m. in the Reception Room of the Niagara University Faculty House. Their attendants were Katherine Louise Hamann and Edward F. Nunn. A reception immediately followed at the home of the bride’s parents in Lewiston Heights, NY.

Bus then went to work for DuPont in Niagara Falls, most probably due to his father-in-law’s position as Chief Engineer with DuPont.  And so the story of Bus’s career begins.
Posted by Mary Nunn Maki at 8:36 AM No comments: