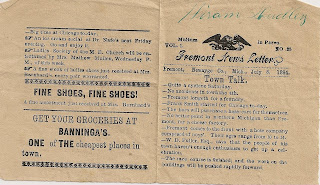 In the process of cleaning out, my mother-in-law came upon three tiny Fremont News Letters from June and July 1884. The recipient’s name, Hiram Dudley, is written at the top.  The News Letters contain “Town Talk,” “Puzzledom,” and “Editorial.” The Fremont News Letters were “published every Tuesday,” and cost 15 cents per year.
Some noteworthy news items from the Fremont News Letters:
Fremont News Letter, June 17, 1884:
Splendid weather for corn.
Fremont Lake will have a steam-boat
While Mr. and Mrs. A. Faught were driving over the track, near the depot, their horse became frightened and ran away, throwing them both out; injuring Mr. Faught so badly that it is feared he will not recover.
Samual J. Tiden was 70 years old last February.
Tilden says he will not be a candidate at the democratic convention.
The Disciple society will give a lawn social at James H Darling’s June 17th, strawberries and ice cream. Every body is invited.
Fremont News Letter, July 8, 1884
Quite a cyclone Saturday.
No accidents in town on the 4th.
Frank Smith started for Chicago today.
No better point in Northern Michigan than Fremont for a cheese factory.
No fights in town the 4th; but there were two marriages.
James Curtice of Morely is visiting in Fremont this week.
While Mr. Wolford was driving through Main Street the 4th, at the discharge of the cannon his horse fell dead.
John Kelly goes to Chicago with 700 uniformed men, with which he calculates to rule the democratic convention. Kelly is for Flower.
Fremont News Letter, July 29, 1884
The Evening News thinks that our townsman Hon. Ed. E. Edwards would make a good senitor (sic). We agree with the News exactly.
We were behind with our paper last week, but we assure our readers that it will not happen again.
The fire-fiend gave N.B. Clark’s residence a call last Tuesday evening. Loss about $250.
Charles Forman and wife are visiting with their parents near South Ridley.
Posted by Mary Nunn Maki at 12:49 PM