Our Day at the National Archives 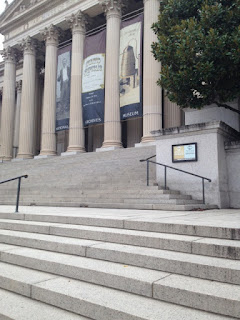 We boarded the VRE (Virginia Railway Express) train to Union Station at 7:51 a.m. at Leeland Station, just north of Fredericksburg. We planned to catch this train, not realizing that the VRE was on their “S” schedule (S meaning “Snow” and/or Holiday schedule), and neither did a number of regular commuters waiting there to catch an earlier train into work. A lot of sighs … But we did learn about the green dot meaning a train is headed our way.

After arriving at Union Station in DC, we quickly trotted (it was cold and windy) a number of blocks to the NARA building, arriving there just before 10:00 a.m., their stated opening time – or so we thought.

The doors were open and we learned they actually open at 9:30 giving researchers time to fill out their paperwork for the 10:00 a.m. records pull.

Since we were newbies, we had to watch a PowerPoint presentation on NARA procedures, and then waited in line to get a photo ID card made. We filled out our forms and got them in the designated wooden box for the 11:00 a.m. pull.   The NARA website used to have a very informative video on what to expect when arriving at the archives. Difficult to locate on their site before, now impossible, and I suspect it has been taken off and replaced by the PowerPoint.

We found the lockers where we stashed our coats, and in walking back to the main section, one of the archive staff approached me and said my ancestor’s records were now on Fold3. We went to one of the computers and she immediately brought up the Widow’s Pension record for Amos L. Tucker. I reviewed the pages while hubby went through the (agonizing) process of getting money on his card so that we could print the documents I needed.

The small café in the basement of NARA is delightful. Hubby had a cheeseburger, and I had a delicious ham wrap, and much needed water!

We arrived in research room 203 just moments before hubby’s documents arrived at noon. Those files provided us limited success.

The elusive John Pye that hubby has been searching for a friend remains elusive. The poor guy was shot in the face and had half his face torn off. He must have been in terrible shape and much pain. The end of pension paperwork that should be there is presumable “lost,” according to NARA personnel. The last paperwork in the file was dated 1873. We did get the name of the attorney who was receiving the pension checks on Mr. Pye’s behalf – George C. Carter of Utica, New York. And we found out that Mr. Pye was living in Adams, Jefferson County, NY.  These are some clues our friend can follow up on to try for date/place of death.

Hubby needed parents’ names for the other two folks he was researching – neither file included those, but for one, a wife and son are named. That was helpful.

The NARA staff were all delightful and ever so helpful, and for that we are so appreciative.

To top off our day, we had the most delicious milkshakes from the Sugar Factory at Union Station while we waited for our 3:25 p.m. train back to Fredericksburg.
Posted by Mary Nunn Maki at 7:59 AM No comments:

I just came upon the most interesting website – Inmates of Willard. The author, Linda Stuhler, has complied lists of inmates at Willard as well as other New York State institutions. She writes a blog, has written a book, The Inmates of Willard 1870 to 1900, and has numerous links on her site directing researchers to the particular area or county in which their ancestors lived.  Linda states:

The goal of this blog is to be a genealogy resource for people searching for ancestors who were patients at New York State Hospitals during the nineteenth and early twentieth centuries. Brief histories of these former institutions can be found on the “Interesting Articles & Documents” page. If you have information to share, please share it here!


Although I don’t think I had an ancestor who was an inmate that died there, I did have one who was hospitalized a couple of times due to extreme stress in her life.  She lost a son, daughter, and husband within a month’s time in 1904.


I am also interested in the history of this state institution because my Hardenbrook line had property adjacent to the hospital and Washington Hardenbrook was stated to be one of the hospital’s oldest and most faithful employees.


For those researching Upstate New York, and think you might have an ancestor in one of the state facilities, do check out this helpful site.  Linda and company continue to lobby the state legislature for release of the names of those who died during confinement in these institutions.

Posted by Mary Nunn Maki at 1:01 PM No comments:

Yesterday’s blog by TheLegal Genealogist, Judy Russell was eye opening.  As most genealogists know, Ancestry offers DNA testing – AncestryDNA. But so does another company called, AncestrybyDNA. It’s that “by” word that is confusing people.

Anyone considering taking a DNA test should first do their homework. Check out Judy Russell’s website as she writes often about what’s new on the DNA scene. Another good site to read is Your Genetic Genealogist by CeCe Moore.

Bottom line is know what you are paying for and what results you expect from the test.
Posted by Mary Nunn Maki at 4:08 PM No comments:

This morning, curled up by the fire with coffee cups in hand, hubby and I decided to make a trip to the National Archives next week. He is still searching for the burial place of John Pye, a New York State Civil War soldier hubby has been searching for years on behalf of a woman in our Newtown Genealogy Club. Recently one of our neighbors presented hubby with a problem with one of her Upstate New York ancestors, and so we will also be searching for a pension record on behalf of widow Rosebelle Greene.

I admit I haven’t paid attention to my Civil War ancestor Amos Tucker as I intended to in my 6 May 2015 blog. At that time I was gung-ho to research these sites:
The 1860 census.
Search enlistment registers, service records, etc. on FamilySearch.org, Ancestry and Fold3.
Check compiled military service records at NARA (and on Fold3)
Martha (van Gosbeck) Tucker died young, I won’t find her in the 1890 Civil War Veterans and Widow Schedule, but this is a GREAT resource for others.
Cyndi’s list
Library of Congress
National Park Service
Regimental Histories (A great idea!)
CW150 Legacy Project
Historical societies and museums.
The Civil War Trust is a wonderful resource and had great maps.

In searching for Amos L. Tucker this morning, Ancestry now has pension application forms available online and we were able to locate applications from both Amos’s wife, Martha, in November 1865 and another from Amos’s mother, Caroline Lanning Tucker dated March 1893. (Martha died in 1877). Martha’s application has a certificate number; Caroline’s does not, which leads me to believe her application was never granted (Caroline died in 1894). I look forward to reviewing these files to see what information they hold and hopefully will clear up the events surrounding Amos’s death.
Posted by Mary Nunn Maki at 9:01 AM No comments: