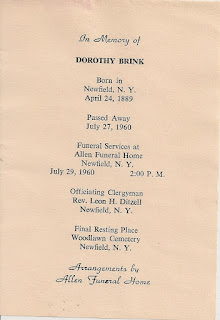 Tombstone Tuesday – Do No Harm!

Do no harm was the most important message Fredericksburg genealogy club member Kris Jankovits learned from her experience at “The Cemetery Restoration and Preservation Workshop,” held 20 October 2012 at the Wood Cemetery located on the Bob Evans farm in Raccoon Township, Gallia County, Ohio.

Before you begin:
Research the state’s cemetery laws;
Determine ownership of the cemetery. Contact owners/association for written permission to clean or restore stones, as well as their rules and regulations;
Document the grave; photos of stone, cemetery entrance, any signage, notes on location of stone;
Determine marker composition – is it fieldstone, slate, sandstone, limestone, granite, marble or a combination.

Important: Do no harm; if you are not sure, leave it alone!

“Write to the girls to be sure and set good examples for their children, tell Alanson I want him to be sure he is in the right course and then pursue it.”
Josiah Cleveland, March 1853

These are the last words recorded of Josiah Cleveland (1772-1853). His words of advice were for his 12th and last child, Alanson Josiah Cleveland. We can’t be sure exactly what he meant by taking the right course, but it may have to do with what Josiah perceived as Alanson’s career potential.

Alanson Josiah Cleveland was born to Josiah and Fanny (Lathrop) Cleveland on 12 March 1822 in Jacksonville, New York.  Three years after his birth his family lost three children, Gurdon Lathrop, Julia Ann, and John Porter to typhoid fever.  Alanson was a survivor and did go on to do good things.

In 1850 he was a teacher in the Town of Catherine; in 1860 he was a merchant in that town. He joined the U.S. Army and fought in the Mexican-American War.  He was elected as one of the first officers of Cayuta Township to hold the position of sealer of weights and measures.

The family relocated to Los Angeles in the 1890s. Alanson died July 1894; Lucy died 1911. They are buried in the Rosedale Cemetery, Los Angeles, CA. 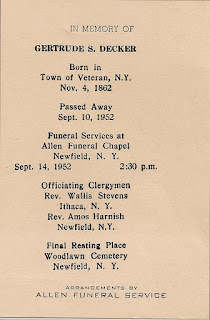 Fanny Belinda Cleveland (1820-1853) was the 11th child of Josiah and Fanny (Lathrop) Cleveland.  Fanny Belinda was born in Jacksonville, Tompkins County, New York. In 1842 at the age of twenty-two Fanny Belinda married Samuel W. Howland. They soon relocated to Waupun, Fond du lac, Wisconsin and had three children: Alanson b: 1843, George b: 1845, and Nelson b: 1847.

This is where the history gets a little fuzzy.  A letter dated March 25, 1849 to her father Josiah Cleveland, transcribed and included in Adaline (Cleveland) Hosner’s Cleveland Family History pamphlet tells how Samuel had started for California on the 6th of March.  Apparently Samuel caught the gold bug and went to California to realize his fortune.  Belinda tells how her husband could hardly eat, drink or sleep thinking about California. Again in April she writes that she feels almost like a widow. She wonders if she will ever see him again, and if not, she writes that she did all she could to have him stay there contented.

However, the 1850 U.S. census (taken 13 September) reports that Samuel W. Howland was living with his family in Waupun, Fond du lac, Wisconsin, working as a carpenter. At this point I do not know if Belinda falsely reported that her husband was in the household, or if he was back in Wisconsin for a short period of time before returning to California.

Tragedy strikes. By January 1853 Belinda could no longer stand to be separated from her husband. She and her children traveled by stagecoach to Chicago, by train to Cleveland, and then on to New York where they boarded the steamer Vanderbilt.

In San Juan del Sud, Nicaragua they transferred to the steamer Independence. On 15 February 1853 the ship struck a sunken reef a mile from shore and 125 (or more) lives were lost, including Belinda and her three children. The steamer sank near the island of Margarita, off the coast of Southern California. The accident wasn’t confirmed until 2 April 1853. The list of passengers is listed in the Daily Alta. Several Howlands are listed, including a Mrs. Howland, but none of the other initials match her three boys.

And where is Samuel?  The 1860 census reports a S.W. Howland living in Anderson, Mendocino, California working as a wheelwright.
Posted by Mary Nunn Maki at 11:00 PM 4 comments:

I am pleased to announce that the Fredericksburg Genealogical Society and the Central Rappahannock Regional Library have partnered to present a series of genealogy lectures.  These lectures are aimed at beginning genealogists to the more experienced.  Registration will begin soon; check the library website for additional information.

March 30, 2013
Sourcing and Documenting Information – Session I
Genealogy 201: Beyond the Basics – Session II

May 11, 2013
DNA in Genealogy – Session I
Continuing the family legacy: Honoring heritage through lineage societies  - Session II
Posted by Mary Nunn Maki at 1:00 PM No comments:

Genealogy by the States – Massachusetts


I am fortunate.  Ancestors on my maternal side arrived on the shores of Massachusetts during the 1600s.  The religious sects, including the one of my ancestor Rev. John Lowthropp, felt the need to keep track of everyone.  We genealogists benefit from that philosophy.

Following his release from London’s Newgate prison, and under the direction to leave the country, Rev. John Lowthropp and his congregation sailed on the Griffin to Boston.  This group arrived in Boston on 18 September 1634. They first settled in Scituate, MA, and then dissatisfied with the quality of the land, the congregation moved to Barnstable.  Originally called Mattakeese, which meant “old fields,” or “planted fields,” the congregation found the land on the Cape more habitable.  The Lowthropp name took on variations as it became Lothrop and then Lathrop.

Reverend John Lowthropp died on 8 November 1653; his will was administered on 7 March 1654:

So, what was it really like for John “The Elder” Agard and his pregnant forty-two year old wife Esther as they crossed the Atlantic in 1683?  What drove them to take that journey? Was it the political climate or the beckoning of a fresh start in the New World?  And did they know that John was dying when they boarded the ship? We may never know the answer.  But arrive they did in April 1683; John either died on route or shortly after arrival.  I do not know whether they arrived at Boston harbor, or near Barnstable, MA. At any rate, it is in Barnstable that we find Esther and her son, John “The Younger,” Agard(b: 16 July 1683).  Esther and John “The Elder” Agard are credited with being the founding members of the Agards in America.

I am descended from these two Barnstable, Massachusetts ancestral lines with the marriage of Arthur Charles Agard and Jessie May Tucker on 26 June 1901.

Sources I used in developing their family story are:

Huntington, Rev. E.B. and Mrs. Julia Huntington, A Genealogical Memoir of the Lo-Lathrop Family in this Country Embracing the Descendants as far as known – Rev. John Lothrop of Scituate and Barnstable, MA and Mark Lothrop of Salem and Bridgewater, MA, The Case, Lockwood & Brainard Company, Hartford, CT 1884.

Thanks to Jim Sanders at Hidden Genealogy Nuggets for this prompt.

In addition to the Tompkins County NY Genweb site, I also recommend the Tompkins County Library’s website .  The site has an obituary index from the Ithaca Journal, beginning in 1860 through 1999. Not all years are available, but the ones that are, are broken down by alphabet for easier searching. The Index to Trumansburg Newspapers is also available here.

This site features a number of interesting items. A volunteer named Olympia is developing an index of births and deaths – Olympia’s Index features deaths from December 1854 through June 1874, and then 1914-1920, and births January 1915 – April 1918. These indexes are arranged by name and also by date.

There are some biographies, rural directories, narratives and memoirs, local organizations, and yes, you can even read about my great-great-great-grandmother in The Pioneer Clevelands.

This site has a bunch of fun stuff for those researching in Tompkins County.
Posted by Mary Nunn Maki at 11:00 PM No comments:

Genealogy by the States – Connecticut

John Agard was only 2-1/2 when his mother Esther married Samuel Storrs.   We shall never know how John felt about joining a family of five girls and one boy all older than he. And we shall never know how he felt about his mother and stepfather adding three more children, Thomas b: 1686, Esther b: 1688, and Cordial b: 1692 to the already large family.

John was fifteen when he and his family moved to Mansfield, Connecticut where his stepfather, Samuel, became a landowner and prominent member of the community.

For instance, in 1702 Mansfield residents were not happy about the distance they had to travel for church and town business.  A town meeting was held and a vote conducted to apply to the General Court for authorization to divide the territory from the Town of Windham. This was approved, and Samuel was instrumental in getting this accomplished.  Samuel and Esther’s house is thought to have stood near the southern boundary of “Ponde Place” cemetery on Mansfield Street.

Little more is known of John.  He left no land records, no death or burial record; sadly no stone marks his grave. But he left his legacy as I am descended from his son John who moved to Litchfield, Connecticut and then on to New York State.

In tracing this family I utilized the following Connecticut resources:

Thanks to Jim Sanders at Hidden Genealogy Nuggets for suggesting this blog topic.
Posted by Mary Nunn Maki at 2:51 PM No comments: