It is not obvious at this point why William Lanning Tucker pinned into his Monday June 16, 1919 diary page this article about Herman C. Owens who was hit by a car in Auburn, New York on November 9 of that year.  I do, however, look forward to learning why this article was important to William. In the meantime, for those whose ancestor was Herman C. Owens, I hope this little tidbit is helpful.

Ithacan Hit by Car, Dies in Hospital
Auburn, Nov. 10 – Herman C. Owens, 56, of Ithaca, who suffered a fracture of the skull when hit by an automobile while crossing a bridge on the Grant avenue road, Elbridge, died at 9:45 o’clock Saturday night in Auburn City Hospital without regaining consciousness. He was in Elbridge visiting his son, Charles H. Owens, a school teacher in that village. The motorist who ran Mr. Owens down did not stop and efforts to learn his identity have been futile.

The plot thickens. According to the Nov. 10, 1919 Auburn Citizen, Mr. Owens was lame and could not get out of the way of the oncoming vehicle. And although the driver escaped identification, it was thought that very driver was the one who delivered Mr. Owens to Auburn Hospital.

Posted by Mary Nunn Maki at 1:33 PM No comments:

Under the category of things I should have done, this 1890 Parish Register for St. Rose Church in Newtown, Connecticut would be at the top of the list. I captured this information many years ago when we were developing the 1890 Census Substitute for Newtown.  The database contained names from the Grand List, School Books, New Electors and Voters lists. But the question remained - how do we find women? The answer: Go to the churches.  I did get to St. Rose one afternoon after work, but that was the extent of my success in visiting all the area churches.


The caveat with this database is that the church register for the most part was in Latin and the handwriting was difficult to read.  If mistakes are found, they are mine alone.  I did try to translate names where I could.


For those with ancestors in Newtown, Connecticut, the 1890 Census Substitute can be found at: http://www.rootsweb.ancestry.com/~ctgcnc/

Delia Rightmire was born in Trumansburg, New York in June 1896 to Olive B. Tucker and John Rightmire.  Delia was trained as a school teacher before her marriage to Elmer B. Wixom.


The Wixoms moved to West Lafayette, Indiana by the 1930s, and then by 1935 to Fairfield Avenue in Fort Wayne, Indiana. According to the Adeline Cleveland Hosner's journal, The Pioneer Clevelands, the Wixoms had three children, Shirley, Phyllis and Everett.
Posted by Mary Nunn Maki at 1:09 PM No comments:

In April 2011 I posted a photo from the James Monroe High School yearbook of the 1939 swim team. I just came across this photo of the swim team (no date, but possibly 1939) that lists names of the team.

Mrs. Teresa A. Redding, 80, widow of Thomas M. Redding, died Sunday at her home, 209 South Geneva Street. Mrs. Redding suffered a fractured hip some time ago. The funeral will be held at 8:30 o’clock tomorrow morning at the home and at 9 o’clock at the Immaculate Conception Church. Interment will be in Calvary Cemetery.
Posted by Mary Nunn Maki at 5:00 AM No comments:


Mabel A. Kennedy, 14 month old daughter of Mr. and Mrs. Frederick Kennedy of the Town of Dryden, died Sunday at the family home of spinal meningitis. Besides her parents, she leaves one brother, Thomas, and two sisters, Catherine and Mary Kennedy. The funeral will be held at 2 o’clock tomorrow afternoon at the family home in the Town of Dryden. Interment will be in Calvary Cemetery.
Posted by Mary Nunn Maki at 5:00 AM No comments:


Located at the southern tip of Tampa Bay, Anna Maria Island has a rich history. First settled in the 1890s by George Emerson Bean, the Island has transformed itself over the years serving as home for the many residents and a home-away-from-home for winter folks.

I remember in the mid-1950s, there were few houses, few businesses, and a spring fed lake that could be seen as you drove along Palm Drive.  But then more houses were built; single family homes and duplexes. My family purchased a duplex located on the 100 block of 75th street.  For three months each winter my grandparents lived in one side, and we lived in the other.  Families could afford to live on the Island and a school was built to accommodate the children.  Winter residents were welcomed because they brought an influx of funds to support the local shops, restaurants, and churches.

Due to intervention by the federal government in the 1970s it was mandated that new construction had to have living areas one floor above ground. This created an unfortunate adjustment in the architecture on the Island. Houses on stilts appeared.

Then developers got creative and greedy; they bought up the residences, tore them down and because many of the lots were zoned “duplex,” they got away with building two three-story houses, connected underground, where one once stood.

Now the cities of Anna Maria and Holmes Beach are challenged with stopping this out of control high-density building. I applaud the Island residents who are standing up against further development and doing their best to maintain the integrity of this beautiful Island.
http://www.youtube.com/watch?v=OAhgcJ99UmE

The Anna Maria Historical Society (http://www.amihs.org/) has a wealth of information and artifacts. They, too, are trying desperately to preserve the beauty of Anna Maria.  And when the museum director asked me if I had photos of our 1950s duplex, I realized that we are now part of Anna Maria’s history!
Posted by Mary Nunn Maki at 5:00 AM No comments: 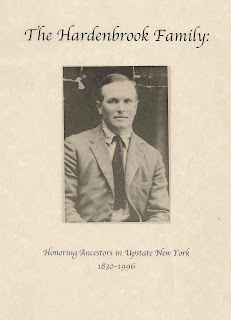 The Hardenbrook monograph begins by setting the stage:

"The legend says that when done resting the Great Spirit raised himself up with one hand; the indents he left in the land filled with water and became known as the Finger Lakes.  Literalists may have a problem with this as there are actually six major lakes — Skaneateles, Owasco, Cayuga, Seneca, Keuka and Canandaigua, and four smaller ones — Honeoye, Canadice, Hemlock and Conesus. So, it may be that when the Great Spirit raised himself, he actually used both hands leaving ten imprints in the fertile lands of Upstate New York.  Or, one may be more inclined to believe that the slim finger shaped lakes were made by receding glacial movement eons ago. Whatever you believe about the origin of the Finger Lakes, one fact remains: the lakes and the land between are breathtakingly beautiful.

And it is to this area between Cayuga and Seneca lakes that Jorgs (George) Hardenbrook and his wife, Ann Kline, settled, first in Covert around 1820, and then near Lodi by 1830."[1]

This headline in the January 1904 Geneva Daily Times captures the tragedy that befell the Washington Hardenbrook family, though it actually lost three family members within a month’s time. Within a couple of weeks their son Lynn was killed while working for the Lehigh Valley Railroad.

There is much more to be done; much more information to be learned about the Hardenbrooks. It is my hope that this volume will catch the attention of Hardenbrook descendants or researchers and it will start a conversation. Consequently I am excited to share this work.
[1] 1820 U.S. Census, Seneca County, NY, Population Schedule, Covert, P. 300, George Hardenbrook, digital image, Ancestry.com (http://www.Ancestry.com) ; accessed 8 Feb 2012, NARA Roll: M33_75; Image 62.
Posted by Mary Nunn Maki at 8:18 AM 2 comments:

Seth A. Cowen, 82, of Enfield Center, died at 2 o’clock yesterday [April 2, 1924] afternoon at the home of his daughter, Mrs. Elmer Hildebrant, 212 West Lincoln Street, after a brief illness. Surviving are three other daughters, Mrs. R.O. Ellis of this city, Mrs. H. T. Harvey of the Five Mile Drive, and Mrs. Eugene Wright of Enfield; also several grandchildren. The funeral will be held from the home of his daughter, Mrs. Hildebrant, of 212 West Lincoln Street at 2:30 o’clock tomorrow afternoon. Interment will be in Hayts Cemetery.
Posted by Mary Nunn Maki at 5:00 AM No comments: