I was sad to learn that my aunt, Beverly Gene Shepard Agard, passed away on Wednesday, 27 July 2011.   Not knowing she was near her time, that very afternoon she arrived in my thoughts. I thought about how lucky I was to visit her on Mother’s Day and to present her with a three ring binder that held her Shepard family history. I explained it wasn’t finished, but I hoped she would enjoy what was presented and that it would bring her happy memories.  As I thought about Aunt Beverly Wednesday noontime, I vowed to give her a call very soon.  We had to rush off that afternoon and didn’t get back until evening, when I received the email that she had passed away.
Beverly was born 10 April 1926 to Howard Eugene and Ethel A. Grover Shepard. Beverly grew up in the Southern Tier of New York, and then the family moved to Hudson Street in Ithaca, New York.
Beverly married J. Richard Agard on 23 July 1946.  She had completed her degree from Cornell University, but put off any thoughts of career as she knew the importance of raising her family. When her two girls were well on their way, Beverly operated her own drapery and upholstery business in Cayuga Heights.  Many homeowners are thankful that Beverly was there to assist them in those important decorating decisions.
Beverly was the best cook. We were always thrilled to get an invitation to Beverly’s house for dinner and couldn’t wait to partake in her delicious meals.
Beverly, you are missed. We miss your smiling face and your wonderful laugh.  Rest in peace.
Posted by Mary Nunn Maki at 6:31 PM No comments:


I am a month late in wishing Art and Jessie a happy wedding anniversary. They were married in her Enfield, New York home on June 26, 1901.
Their anniversary dinner was celebrated at Taughannock Farms Inn overlooking Taughannock Falls State Park on Cayuga Lake.
Posted by Mary Nunn Maki at 6:22 PM No comments:

While visiting my sister-in-law last weekend I noticed she had a memorial booklet for the celebration of the lives of Eleanor Edith Burdick and Stanley Wilson Shaw.  This couple interested me because they met in 1937 at Sheldrake Point on Cayuga Lake, one of my favorite spots, and just a few miles from where I grew up.
Upon Eleanor’s passing in 2007, her daughters went through the family documents and found a number of letters written by their parents to each other during the 1940s and 1950s.  The booklet is a beautiful tribute.  The engagement announcement for Eleanor and Stanley was included:
Engagements
Shaw-Burdick
Mr. and Mrs. Horace Burdick of Ithaca RD4 announce the engagement of their daughter Miss Eleanor E. Burdick to Stanley W. Shaw, son of Mr. and Mrs. Seneca Shaw of Trumansburg. No date has been set for the wedding.  [Wedding occurred 31 August 1940]
Posted by Mary Nunn Maki at 7:42 AM No comments: 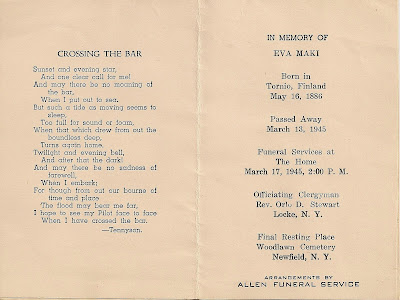 The spring of 1945 was late coming.  Snowfall had been relentless and may have played a small part in Eva’s steadfast decision to remain at home when she contracted pleurisy.  But in reality, her concern was most probably the cost of hospitalization; a cost that would have been prohibitive for this subsistence farm family.
Eva Nara was born in Tornio, Finland to Iisakki and Kaisa Kreeta Alanara.  Eva’s nine siblings were: Hilda Maria (died age of two years), Hilta Karoliina (died at one year), Hans Wiljami (died at 6 months), Hans August (died at five years), Anna, Alma, Iisakki Wilho, Juho Petteri, and Kreeta Amanda.
Eva emigrated in 1906 on the SS Victor out of Liverpool, England when she was twenty years old.  By 1907 she was working at the Spaulding Hotel in Duluth, Minnestota where she met her soul mate, Emil (Tenkula) Maki. They were married on July 14, 1908.
Eva’s sister, Anna, married John Helsiva and they settled just several miles away from Eva and Emil on Van Kirk Road in Newfield, NY.
So on March 13, 1945, the family took Eva's body by sled to the point where the Town of Newfield had brought out men to shovel the road in order to remove Eva’s body.
Posted by Mary Nunn Maki at 5:02 PM No comments:

Family belief was that my cousin’s wife’s grandfather, John Colesie, had changed his name. That would have proved a challenge in tracing him.  John’s 1903 naturalization Declaration of Intention stated he was twenty-seven years old, a sausage maker; he was white, light complexion, 5 ft. 6 in. with hazel eyes.  He was born 16 Feb. 1887 in Bliesansbach, Germany. He arrived at Buffalo, New York by rail from Toronto, Canada. We did not know whether or not he changed his name until we found a document of Marriages in Boston for April 8, 1912, which states his parents were Michael Colesie and Maria Shmidt.
At this point we don’t know when he arrived in Canada and whether or not his parents immigrated as well. A project for another day.  But at least we cleared up one misconception in the oral history.
Posted by Mary Nunn Maki at 8:25 AM No comments:

Several years ago I did some research for my cousin’s wife on her maternal grandparents, John and Anna Colesie. That request has come ‘round again, and so I revisited this couple.
Anna Umschied was born 1885 in Germany to Cornelius and Anna Straub Umschied. Anna immigrated to Boston in 1903 and was employed as a parlor maid for Paul and Frieda Thomas.  Anna married John Colesie on April 8, 1912.  In January 1915 their only child, Helen Rose Colesie was born.
Oral history carries the story that Anna’s father, Cornelius, deserted the family after Anna’s mother died. Anna ended up in an orphanage. Her two brothers, George and Jack left Germany, came to the United States and then sent for Anna.  At some point a woman named Frieda Farris comes into the picture, but not sure how. She may have married one of Anna’s brothers, and possibly has genealogy on this family.  Anna’s brothers married and had children.
According to my cousin’s wife, secrets abound; consequently, any help on this family line would be much appreciated.
Posted by Mary Nunn Maki at 7:43 AM No comments:

Or: Do you know the people in your neighborhood?
We moved from Chicago, Illinois back to our hometown of Ithaca, New York in June 1970. City living wasn’t for us rural kids, so we used the excuse of attending Cornell grad school to move back onto home turf.  As we finished the two years master’s program, we started looking for a house to buy. Next door to my in-laws was this cute little house with a cute little price. But a price a bit beyond starving grad student reach, and the house needed a lot of renovation and updating.  The house was owned by Einar and Impi Mustonen.  They married about 1930, never had any children, and lived on their small subsistence farm in the hills of Newfield, New York.  In the 1930 census Impi was forty years old and a servant in Chicago; her husband, Einar was a painter in a Chicago hotel.  Although we decided not to buy their house, we did purchase their wringer washer and used it in our apartment.
Menanga, Minnesota - Mrs. Impi Mustonen, 87, a former Newfield resident, died Saturday, July 30, 1977 in the Green Pine Acres Nursing Home here. Born September 28, 1889 in Pomarkku, Finland, Mrs. Mustonen was the daughter of the late Jacob and Selma Makela. Mrs. Mustonen had resided in Minnesota for the past seven years. She had been a resident of Newfield for more than 40 years. She was the wife of the late Einar Mustonen, who died in 1970. Mrs. Mustonen is survived by a brother, Jalmari Makela of Pomarkku, Finland.  Burial will be in LaRue Cemetery [Van Etten, NY].
Posted by Mary Nunn Maki at 10:34 AM No comments: