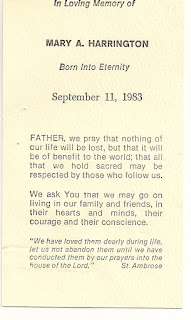 I came upon this funeral card today. The dearth of information imparted is testimony that she had no living relatives to provide such.  I remember clearly the early October day this card arrived in our mailbox. We were living in Newfield, New York at the time, and although I had not seen her in over ten years, we exchanged birthday and Christmas greetings.  But in 1983 my greeting for her 15 September birthday arrived too late.  I am thankful to the kind gentleman neighbor who intercepted the birthday card and then mailed me the funeral card with a note that Mary (Mae) had passed away.

There were too many Marys – Mary A. Harrington’s maiden name was Mary A. Conlon. She was my grandmother’s (Mary Doyle) cousin.  By 1920 Mae b: 1902, and her three brothers, Edward b: 1897, George b: 1899, and Lawrence b: 1901 were living with the Doyle’s in their Manhattan apartment. I suspect since my grandmother was “Mary,” they nicknamed Mary Conlon, “Mae.”  And that is how we knew her.

In the 1920s Mae started work in the fire department as a stenographer. She married in the early 1930s, and lived in the Bronx for the rest of her life. The 1940 census shows John and Mary A. Harrington living in the Bronx. John works as a “typest” for the fire department; Mae is not working. At some point she went back to work as I remember so well how proud she was of her position as “Secretary to the Fire Chief of New York.”

During my growing up years Mae spent her two-week vacation at our Taughannock Boulevard house, visiting my grandmother, her cousin, Mary Doyle Nunn.

Upon retirement she then could join us during our time on Anna Maria Island, Florida, again, able to spend time with her favorite cousin.

A kind gentle soul, Mae was a wonderful lady, soft spoken, and with a very sweet smile.
Posted by Mary Nunn Maki at 8:13 AM