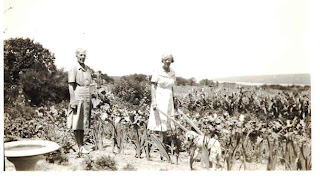 I love this photo of my great-grandmother, Jesse May Tucker Agard (b: 1876), her sister, Adelaide Tucker (b: 1871), and Honey, the dog (birth date unknown), because this photo explains from where I inherited my need to be close to the land. Each spring I can’t wait to get out in the garden and turn over the soil, even though it is months before it is safe to plant.  Like Jesse I am driven to plant seeds and seedlings of various vegetables, always excited to try something new.

The Agard farm, overlooking Cayuga Lake, was worked by Jesse’s husband, Arthur Agard (b:1880), and his father, John Wesley Agard (b: 1857), and then later with Art and Jesse’s son, William  Agard (b: 1914).  While the men farmed and sold crops from their many acres, Jesse lovingly tended her smaller garden that provided food for her family.  She also grew various flowers in gardens around the yard.  Jesse tends her garden in a dress – she never wore slacks. With corn growing in the back of the garden, I suspect the spiky leaves towards the front are gladiolas.
Jesse’s sister, Adelaide Tucker, remained single and taught school in Asbury Park, NJ. During school holidays she rode the train from New Jersey to Willow Creek to spend time with her family.
Posted by Mary Nunn Maki at 6:23 PM