Genealogy of the Agard, Nunn and Related Families

The Nunn Family
I knew two things about my grandfather, Harry J. Nunn: (born" Ignortz," later listed as "Henry,") Harry was an orphan, and he drove for Mayor LaGuardia. And that is where my genealogical search began.  He was born in New York City Sept. 10, 1890 to Joseph Nunn and Katherine Kurtz. Surviving Siblings were: Elizabeth Nunn, George Nunn, Kate Nunn, Joseph Nunn, Amelia (Emilie) Nunn, Emma Nunn.


Joseph Nunn was a harness maker and died abt June 1900; Katherine was then hospitalized in the Manhattan State Hospital from June 1900, soon after giving birth to her 11th child, Charles (Casper) J. Nunn, until her death in 1917.


After Joseph's death and Katherine's hospitalization, the Department of Public Charities, Out-Door Poor arrived and admitted the Nunn children, with the exception of Elizabeth, through a Permit of Admission of Destitute Child to the MIss. Sisters 3rd Order of St. Francis in Peekskill, NY.


Nine years later I found Harry and his siblings in St. Joseph's Home, Peekskill, NY.  There were 11 children in the family, though not all survived. The hero was 13 year old Elizabeth "Lizzie" Nunn who, as she married Louis Siebert in 1905, brought her siblings out of the home to live with her.  Elizabeth had two daughters, Eva and Regina Siebert. I would love to connect with their descendants.  Elizabeth holds the key to the mystery of this family line.


The Agard Family
This New England family is well documented, so it was not difficult to trace them from Barnstable through Litchfield, Connecticut and into the Town of Catherine in Upstate, New York. The founding member of this family was Esther Agard, who arrived in MA in April 1683. Her husband, John "The Elder" Agard died either on the ship or upon arrival.  Esther gave birth to John "The Younger" Agard in July 1683. They lived in Barnstable, MA, where she then married Samuel Storrs. They moved to Mansfield, CT, where they are buried near the Storrs family monument in the Old Burial Grounds.


The Doyle Family
I suspect that my great-grandfather Patrick Doyle (b:1860) arrived in New York on July 1, 1885. He married Margaret Conlon. In 1899 Mary A. Doyle was born; Winnie Doyle was born in 1903. The Doyles lived in the 12th Ward of Manhattan where Patrick worked with the Sanitation Department. By 1920 the Doyle apartment also housed Harry J. Nunn, husband of Mary Doyle Nunn, their son, Harold Nunn, plus cousins Edward, Lawrence, George and Mae Conlon, and seven year old niece, Catherine Murphy.


The Lothrop/Lathrop Family
By following my great-grandmother, Jesse Tucker Agard's line I found we are descendants of Rev. John Lowthropp.  Rev. Lowthropp was a renowned (and imprisoned) Congregational minister who traveled from London, ending in Barnstable, MA, in a house that is now the Sturgis Library. This family named changed to Lothrop, and then to Lathrop. Fanny Lathrop married Josiah Cleveland in New London, CT abt 1798 and they traveled west ending up in Jacksonville, NY.


The Hardenbrook Family
My latest adventure is searching the Hardenbrook family line. My g-g-grandfather, Enoch Hardenbrook, Jr. was raised in Jacksonville, NY by Nathaniel and Mary Simpson, since Enoch's mother, Emma Higgins Hardenbrook, died July 1, 1882, two months after his birth.
Enoch, Sr. then married Florence Kerry in 1887, and moved to Auburn, NY, and had 5 children.  After Enoch's death, Florence then married Robert Perkins We recently visited the Auburn Records Department and they were wonderful! All probate records are in easy to access PDF files. We visited Soule Cemetery where many of this family are buried, but not Enoch, Sr. Still looking for his and Emma's final resting place.


It was fortunate I had traced Enoch, Sr.'s second family and called ahead to get the lot number of Florence Hardenbrook Perkins' grave, since she is buried with her daughter, Edna Berry, and Florence's stone reads only, "Mother." 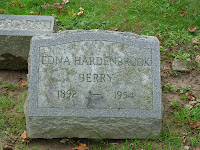 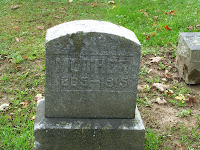 Florence Hardenbrook Perkins
Further research at the Ovid, NY Library produced an 1876 map that showed the Hardenbrook farm to be in Joint District 05 overlooking Seneca Lake, near Willard, NY.
Posted by Mary Nunn Maki at 2:35 PM