My current project of documenting the Tucker family brings me to a geographic area just north of Ithaca, New York that I had thought of as just a crossroads. I am now learning that during the 1800s, Enfield was the busy hometown of the many branches of the Tucker family.  I am a bit overwhelmed already as I trace out the eight living of ten children of Ezra and Caroline Lanning Tucker. And then researching the four daughters of William Lanning and Fanny Adelia Hosner Tucker.

I learned that William was raised on a farm in the northeast corner of Enfield, possibly attending School District #10, while his father supported the family by being a blacksmith.

Although early residents of Enfield, NY were from Pennsylvania, New Jersey, and Middletown, Connecticut, it is suspected that Enfield, New York was actually named after Enfield, Connecticut.

When I am feeling stressed about the amount of work ahead of me, I gaze on this postcard of early Enfield that was recently found in a box in the back corner of my great-grandparent's barn. 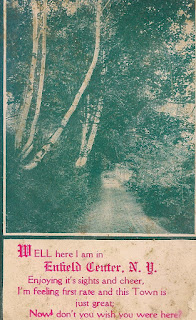